Once again time has run away with me and suddenly it’s 2015! Since my last post the grandparents arrived from the UK; we have hosted a drinks party (attended by almost more children than adults, who proceeded to turn my living room into a movie theatre, where the popcorn machine had a nervous breakdown!); enjoyed a family treat to the ballet to see a seasonal tradition, The Nutcracker, which had both boys attempting to walk on their toes and pirouette for the following couple of days. Santa then brought MORE Lego, which neither child would let me help build, so I sulked in my craft room building my new ink caddy, which took all of five minutes then two hours to arrange the inks in colour families and make sure all the labels pointed the right way. I cooked the most enormous bird to perfection and enjoyed eating my own body weight in Christmas pud because I could, having made it flourless. Drank lots of wine and wore stretchy leggings to accommodate pudding.

There has been lots of sleeping in, due to very little nocturnal snoozing, sadly not for the reasons you might think, but my arthritis picked a very inconvenient time to flare up. After finally resorting to prescription sleeping pills just to stop the clock- watching, my physio then treated me with five thousand needles, which caused copious amounts of screaming. It probably wouldn’t have been so bad if I hadn’t had the bright idea to host a joint Harry Potter birthday party for the boys between Christmas and New Year. It was the ultimate crafting challenge for Steph and I. We have spent the last two months making… paper wands, felt ties, Quidditch Pong, floating candles, a ‘Have You Seen This Wizard’ photo frame, Pin the Beak on Hedwig, HP Bingo, Pass the Howler, party bags containing Bertie Botts Every Flavoured Beans and Golden Snitches, and a very cool brick wall made by painting a $5 sheet to create platform 9¾! We sorted 27 kids into the four houses and dressed as wizards and witches – I copped for Hufflepuff so, yes, I was Professor Sprout. We played games, earned house points and – according to the emails I received the following day – threw the birthday party of the year. We were knackered but we all had a lot of fun and my boys have kindly donated $200 of birthday money to the British Columbia Children’s Hospital – their choice entirely.

So, here I am beginning a new year, not sad to see the back of 2014, despite it ending on a high. It began in a dark place, a place I never thought I would visit, and hope never to visit again. From somewhere deep inside I found an inner strength that I never knew I had. It helped me pick myself, and move forward. I sometimes looked back, but as that dark hole got smaller and smaller I found I could face things that many would shy away from. And among all of that I achieved something I thought was unachievable… Bruises. What now? On January 1st I began 365 days of writing. Everyday I will write in my journal: thoughts, feelings, life events, and just whatever I need to empty out of my head. I also love quotes, and Santa was kind enough to pop a quote journal in my stocking, so I also plan to record a new quote everyday.

A new year with new challenges.

This post is long overdue – sorry about that but real life has taken over and my boys are already hyper about grandparents arriving and the pending festivities.

Saturday (over a week ago now!) – when it came to the book event, the only thing I was worried about was nobody turning up. Waking up the day before with a raging eye infection that required an emergency trip to the walk in centre was not part of the plan. That evening I was also accompanying my husband to a conference dinner he’d been speaking at. Two events that require makeup and NOT the sticky antibiotic ointment I waited over an hour to get, in between delivering offspring to birthday parties, dropping off supplies for the book event and reprimanding my 5 year old for eating only candy at said party! G&T required while trying to disguise puffy red eye.

Sunday – another birthday party, but thankfully hubby dealt with this one alone while I arranged bits of cheese, cold cuts and crackers on trays, looking glamorous in baggy checked PJs, Velcro rollers, slouchy slipper socks, and a bleary eye full of ointment! Threw some school uniforms at the washing machine in the vague hope they would be laundered, and dug out something from the freezer that my babysitter could easily assemble for dinner.

When we arrived at Future Hair Training Centre that afternoon, I was blown away to find the extent to which Cynthia, the owner, had gone to make the event special for me. She had provided a sign in sheet at the door, a clever red carpet poster for pictures, and Hollywood-style Walk Of Fame stars on the floor. It was all very novel (pun intended) and fun! Several friends/neighbours/mums from school, who wanted to show their support, had said they would pop in, but we all know how it is during this busy time of year. All credit to most of those good people – they stayed true to their word and took time out of their weekend to join me. My husband and my closest friend (to whom the book is dedicated), were right there with me throughout. I felt confident and comfortable being thrown into the ‘spotlight’ for the first time. I think when you believe in yourself and your product there is no reason to doubt your ability to put yourself out there. For a first event, I was pretty happy. 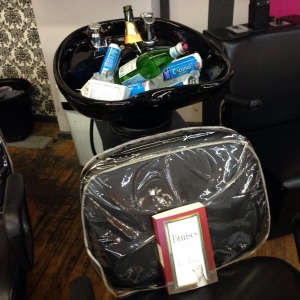 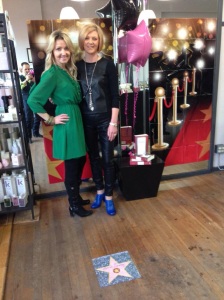 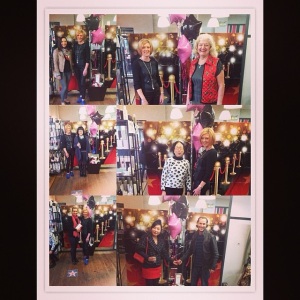 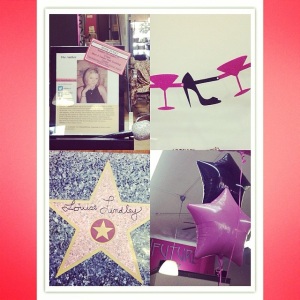 I have no idea where the rest of the week has gone. We’ve been having some minor renovations done on the house; I can tell you that one day (don’t ask me which one, can’t remember) I had a very heated discussion with our handyman over communication issues. Mid-week we finally got around to getting all the decorations out and purchasing trees (yes two, slightly excessive I know but the money goes to charity). My husband has a ‘thing’ for large Christmas trees; in fact, it was almost twenty years ago to the day that I was lured into his apartment by the glorious smell of pine and subsequently fell in love. It has taken us nearly four days to get the wretched things into the house and decorate them, for the end of the week has been, if possible, busier than the start. My elder son turned 8 at the weekend, on the same day as our 16th wedding anniversary. He also received an early birthday surprise at the school assembly on Friday, where he received a Principal’s Award after only starting at that school in September – very Proud Mum moment where your bladder is too near your eyes while sat in the front row in full view of all the teachers. My husband’s Christmas party was that same evening, where there was a lot of wine flowing and not enough food! (We’ll not discuss that any further!) I did sell a few books, which was unexpected. A weekend of celebrating, and then what do I get? ANOTHER virally thing that makes my body feel like it’s been trampled on. I would give anything for a day off from chronic disease, just a few hours of pain free time would be great if anyone wants to trade?

Despite the bugs, life goes on. The decorations are all finally up, even though the tree looks like it attended the Xmas party with us and still hasn’t sobered up! I’ve finally baked my Christmas cake (even though I can’t eat a single bite of it), the birthday boy had a great day and is now the proud owner of a new desk and shelves (thanks to hubby and his tools), the renovations are complete in time for the in-laws to descend, and I have found that the only way to deal with the evil virus is to pickle myself in mulled wine!

Stay tuned for another week of motherhood and holiday madness…

It’s got to that time of year again when you find yourself mingling with friends, friends of friends, & frankly a ton of people you’ll probably never mingle with again!
When I worked as an intensive care nurse, especially in paediatrics, I would mingle at gatherings & when asked what I do would proudly announce my job status. I haven’t worked as a nurse for 7 years, and I’m unlikely to ever again thanks to my disease. However, I moved on to discussing the everyday shenanigans of my 2 children, which is a full time job in itself but, after a while, you come to realize that actually your children are the ONLY thing you have to talk about. Did I ever sit down and think to myself ‘I’ll write a book that will make me interesting’… No, of course not because Me? Really? Don’t be ridiculous!!
So yesterday I find myself mingling at a pre-christmas gathering at a friends house, being asked the question again ‘what do I do?’ Now I have seen the jaw dropping responses of a few strangers recently, but my husband had not yet witnessed this… well now he has, and once again the person’s reaction was jaw dropping. I can’t lie, it’s an amazing feeling because really, its’ the last thing you expect a person to say… ‘Oh I’m in the process of publishing my first fictional novel!’

Once again I have a million things going on in normal everyday life, but that’s mainly because it’s almost December & I agree to stupid things like hosting my husband’s department Christmas party!! I remember this time last year frantically putting the house straight following renovations. I would suddenly stop whatever I was doing to make whatever crazy notes had popped into my head, unbeknown to me at the time, a story was beginning to develop. So, as the chaos of real life continues a year on, I have already revisited my first 5 chapters AGAIN! Scrutinizing, adding, removing & re-polishing AGAIN! When I think back to how those early chapters looked at the beginning, no wonder my husband didn’t really take me seriously!